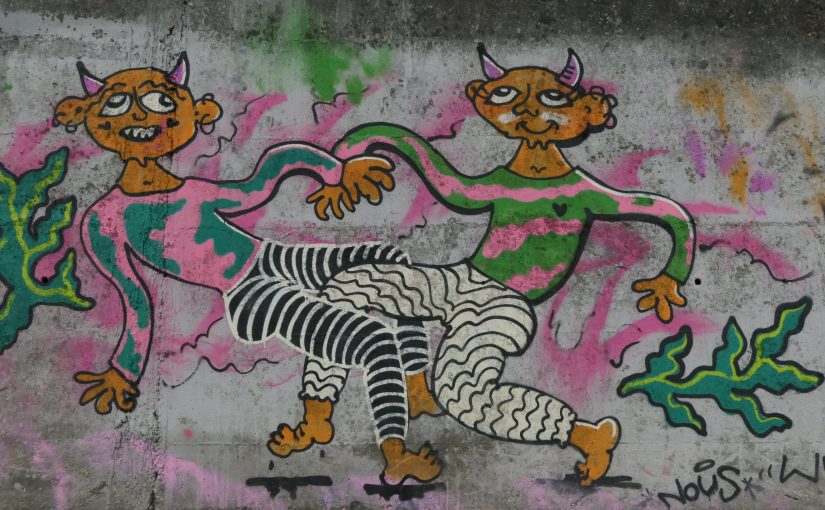 I had a bit of time off yesterday afternoon: a post to come about that, but otherwise I’ve been working pretty hard here in my new airBnB hermit’s hole in Toulouse. I finished my last contributions to a paper I’ve been writing with Clara and some of her students a bit before lunch and felt exhausted. I knew I still owed lots of work to many projects and people but also knew that I would be an idiot not to take a break and a walk. So I decided to walk out to the Garonne. That’s the pretty large river that runs through the heart of Toulouse off to the Atlantic.

It was a grey day and a few raindrops fell at the end of the walk (literally a few: quite a odd feeling) but it was a great decision. I found myself on a footpath along a side channel of the river at first and the first memory trip was back to I guess around 13 to 15 years old when I spent at least some hours most weekends birdwatching with two friends from school around Leamington Spa where I lived from 11 to 18. There was the slightly mushy ground underfoot, the river (OK, the Leam is a stream compared to the Garonne) and there was a smell of wet vegetation, I think a sharp smell of nettles mostly. It took me back to something that had been precious in those teen years, for all it was just normal to me back then. Walking through countryside with varied habitats and diverse bird life. That’s something I would like to do in my retirement in France if ever get there and I’m not sure I’d been in simple, damp, not terribly attractive, marked but not much used, paths in the way I was today since those teenage weekends. The ornithological highlights were a couple of cormorants in flight but I didn’t have binoculars nor did I just stand and wait for a good while anywhere. There would have been much more around.

Then I came (past an odd collection of deserted tents and debris: a former refugee hideout?) to the main river and could see people in sculls and I was straight to a later, and perhaps an early, reconnection. The main one was to my first year at University when I tried my hand at rowing and ended up in the Queens’ College first VIII and loved the experience. The earlier association, which has only struck me now, was that for a short time within that birdwatching phase I also kayaked in the Leamington canoe club and loved that too … until I drank too much horrible Leam water failing to learn to roll a kayak and panicking!

Oh boy, I’d love to end up living somewhere where I could go back to kayaking and rowing, or sculling. (Oh, rowing needs and even number of you as you only have one oar, sculling can be done on your own as you have two oars, actually, blades, one in each hand.) I was impressed by the gender and age mix of scullers and rowers. I was never any good in a single scull: they capsize incredibly easily unless you really get the knack of being pretty perfectly symmetrical and of holding your balance if waves or wind are perturbing things supposing you have managed basic symmetry. I’d love to go back to trying again though, and I did get to manage rolling a kayak on a family holiday a few years back, even managed to get the trick of doing it without a paddle so kayaking again would be great too! (I don’t ask much do it?!)

I’m playing around putting up short galleries capitalising on having set the camera to burst off five shots at a time, bracketing exposure (hence the varying light in each).

[If you’re not much into this rowing/sculling lark, jump to the end now!]

I mostly rowed in an eight but did go out in a pair a few times and found it nearly as hard as a single scull. That’s much, much harder than it looks!

They’re not smooth or perfectly together but I’m impressed! This younger pair sculling reminded me where I’d be starting off (assuming I could find someone willing to scull with me!)

Oh dear, that brought back so many things the coaches shouted at me back then: not keeping in synch with the stroke (doh!), overreaching, shoulders hunching up, digging (when you go too deep into the water, often because the boat is over to one side or because you didn’t get the blade face nicely vertical at the catch … if the boat wasn’t to one side when someone digs, it soon will be!) They seemed to be having fun and reminded me that these craft move quite fast even if you’re not putting that much effort through effectively. These are actually much nicer boats than I ever used.

Now this chap was pretty smooth.

That’s way beyond anything I ever achieved and he could make that scull move at a real lick. Blades like that were just coming in when I rowed (1975/6) but I never used them. (I guess if I’m being enviously hypercritical, he is hunching his shoulders forward a bit in the return!)

This lass was definitely not in that league and I think, I hope, was quite amused to find someone pointing a camera at her.

If I’d turned my head that much and for that long I’d have wobbled terribly. I now remember that the worst challenge was that you had to look over your shoulder to see where you were going!

Oh yes, I remember that too: practising your arms and coordination while keeping your legs fixed out straight and not using the slides. It was fascinating how the power you could deliver dropped to a fraction of what it was with legs and the slides. A bit like swimming full front crawl versus practising your leg action while holding a float with your hands. (Oh yes, I did swim a lot for a while as a young teenager, this is memory lane session.) Now for another young pair.

This club is really doing well getting people on the river.

Finally, another impressive pair from the (also impressive) huge flood defence walls this side of the river at this point as it passes through the town.

In these smaller boats timing is crucial but there isn’t the extraordinary challenge of trying to get eight people doing something exactly together that there is in an eight (doh again!) We were a very successful eight but on enthusiasm and some brute strength rather than any skill, only two of us had rowed before. I remember the only time we hit the catch together. The catch is the crucial moment when you have dropped the blade in the water and it’s just covered and you slam the leg power on, the arms come a fraction later as they’ll just waste leg power if your arms are bent at that first moment. I guess in ten weeks or so rowing in that first eight we really only had that millisecond precision of all hitting the catch together, and well, once. It was a bizarre experience as the noise wasn’t “crump” (that’s a lovely noise, as opposed to “slush” when you’re really out), it was “crack” and “crack” as in pistol shot … and the whole boat seemed to leap forward. We were in training not racing and we literally never managed it again!

A few years later, when I’d moved on to clinical training in London, I went to watch the “head of the river” race which then was some 150 or so (I think) eights rowing the reverse of the famous “Boat race” route. The crews are set off some time, 15 seconds perhaps, after one another with the winner from the previous year going first and working backwards. We had seen perhaps 80 boats go under our bridge and they were pretty clearly going down to my old boat’s level of skill and timing. Then a boat seemed to be simply shooting past others and as it came beneath us it was awe inspring: “crack”, “crack”, “crack” some 34 times a minute. It turned out that it was the UK olympic/world squad who hadn’t entered the previous year and were entered in some convenience placing. I’ve been lucky enough to watch some very, very good swimmers at Crystal Palace, and once to be on badminton courts as the UK squad came alongside us to train. There’s something incredible about truly good athletes that close!

Enough (“much too much” I hear many of you cry!) I’ll sign off with some art.