Created 27.iv.20, click here to register to get updated when new posts, images and pages appear on the site.

Well these are strange and, for very many, horrible, times. I’m pretty lucky up here, this morning I raised my gaze from the screen to look out, my attention caught by a movement and there was a golden eagle being mobbed first by one of the local alpine choughs and then by two. I grabbed my binoculars and dashed out onto the terrace and for minutes they spiralled above until the eagle I think eventually gave up and disappeared into cumulus really quite high above me. At that point I realised how fast they had been moving both horizontally and vertically, the eagle doing it with very little wing movement while the choughs, little over half the size, flapped more obviously and short in out clearly trying to hit the eagle’s tail and wings while escaping that huge beak. I don’t get that for entertainment in London! I don’t think I’d have got any usable ‘photos had I grabbed the camera rather than the binoculars: it was happening so fast and probably needed a longer lens than the upper end of the “superzoom” I have. Sorry! However, this was a view a couple of hours earlier this morning. I think if you click on it you get the full sized image.

I guess that’s about a sixth of what I see as I look up. That’s the first time in the last seven weeks that there’s been that carpet of low cloud down in the valley. Most days I think the early sun has actually been too strong, and the air down there too dry for that though over a whole year it’s a frequent pattern. So the aesthetics up here are stunning. When I arrived the snow on the terrace was chest high and I wouldn’t have been able to get out there with binoculars the first few days as the snow was less than a foot from the windows, door and walls. As the sun blasted down, day after day, the snow receded. The first week created enough space to squeeze out of the door and this auto-excavation. I think some rather more impressive artefacts are being revealed from high Norwegian passes as climate change excavates them. This was not quite in that league. 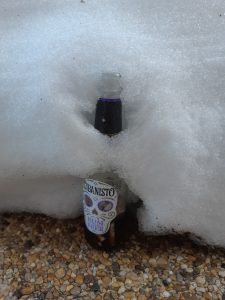 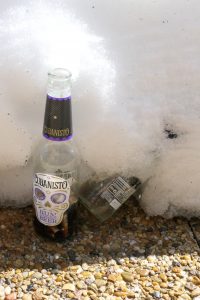 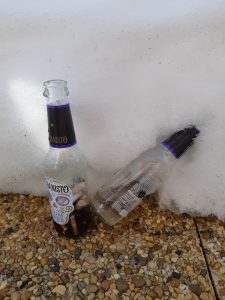 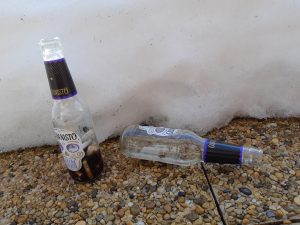 As the snow receded the sun really was hot so I did a bit of engineering. 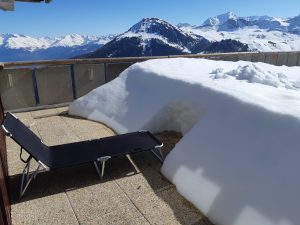 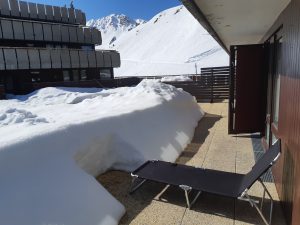 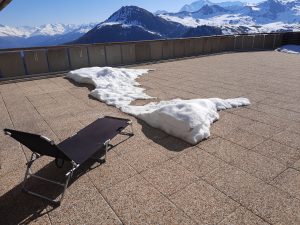 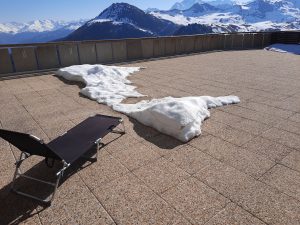 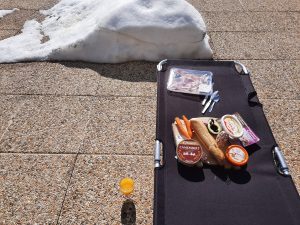 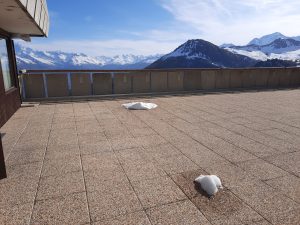 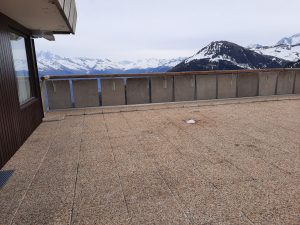 I don’t want to give the impression that it’s been all birdwatching and sunbathing up here. There have been some minutes of the first and, OK, a few hours, enough for me to have lost my pasty pallor and started to tan, but mostly I’ve been working.

Coronavirus, SARS-CV-19, whatever other terms and acronyms one uses, has been a savage backdrop. The work providing online CORE forms has continued: if you go to the ResearchGate page and look at the project log that gives some history of that and https://www.coresystemtrust.org.uk/parse_logs3.html shows that the forms are being downloaded and I’ve become involved in supporting an impressive “psychological first aid” project in Ecuador and, this last weekend, an exploration of views of CV-19 in Greece and all the usual work continues.

But I’m safe and well, my family seem safe and brave too but so many have not been so lucky and we’re clearly starting to see ugly sides of political and economic reactions. We’ve a long way to go: stay as safe and resilient as you can. I’ll finish with Mont Blanc in the sunrise this morning. Another that may be worth clicking to get the full image.

Click here if you want to get Email alerts for new posts, pages and images on the site.