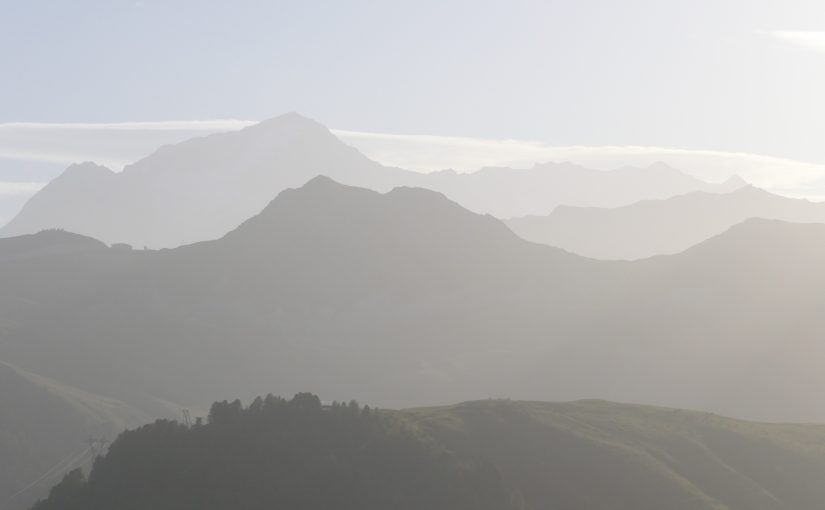 It’s worth watching through three minutes and 35 seconds of the timelapse video for today to see this through a different lens.

I get along OK without alcohol on weekdays up here but this visit we’ve evolved a pattern of “sharing” drink at at least one point over the weekend partly because a lot of tough stuff has been happening around J and tnp and S and other friends back in the UK. I celebrated the switch from work to this by filling a glass of red wine and taking the three paces back to the keyboard I raised the glass around the compass to many people I work with happily around the world and to friends (mostly in UK but some of my work colleagues further afield have become great friends as well as great colleagues.

So, cheers and thanks to all. (Ouch, it’s 23:40 for goodness sake, hm, where did the last hour go? … OK, I have been working a bit later than usual as J is having a meal with friends and will check in later.)

This morning opened with a lot of haze in the air creating what photographers call “atmospheric perspective”: where you can see what’s further away and what’s nearer by the blurring and desaturation of colours the further away things are. Of course, overlap perspective up in the mountains mean you can be very wrong about how far away things are but never about what’s in front of what! However, this “atmospheric perspective” is a part of the glory of the views up here that I love. So let’s have that header image from this morning again. (As usual, click to get the full image.) 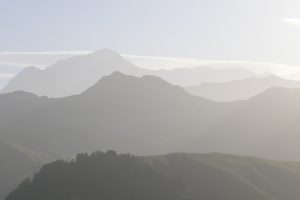 Looking a bit to the side got this. 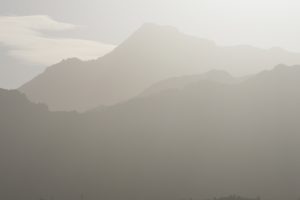 And in between the air seemed clearer and Mont Blanc had one of its hats on. 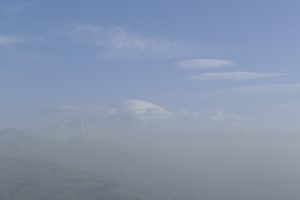 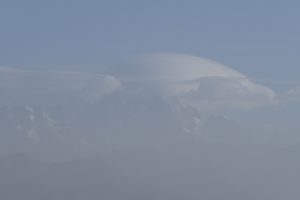 An hour or so later the haze had burnt away by the rising sun and I took my morning coffee out onto the terrace and was lucky enough to coincide with a Golden Eagle circling around. It seemed hardly to move its wings at all but moved fast in wide circles, lovely to follow with binoculars but too far and too fast for any attempt to film it with the camera. It reminded me that walking back up from the shops on Monday I had heard a raptor cry and for a moment, breathing heavily up the slope, I thought how that sound is such a TV and film sound track cliché (I sometimes joke about doing a PhD on the use and abuse of bird calls and cries in film and TV). I looked up and there was one Golden Eagle flapping slowly and heading off towards the valley. I looked around and there were two more, not following the first, who was the one doing all the crying. That’s the second time recently I’ve seen three together so I assume it’s a parental couple and a first year young one. All three were flapping, slowly, seemingly heavily, but moving fast. The contrast with the one this morning in flight style was marked but I imagine that warmth this morning was creating a lot of lift so the same bird (species anyway) could fly equally fast seemingly with no effort at all. These are real joys for me up here.

Then it was back to work, not writing R code very well (it comes and goes!) meanwhile the day outside darkened and the idea of sunbathing while having lunch disappeared. However, at one point I looked round the monitor to catch a rainbow, so here it is. Happy hunting for the pot of gold, I think it’s near Plagne Village! 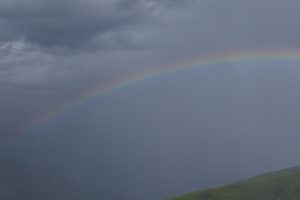 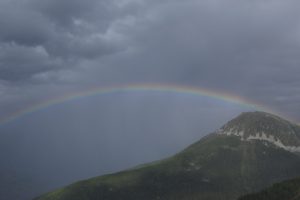 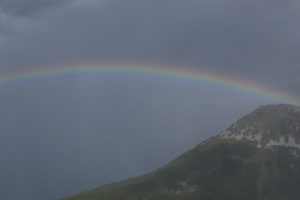 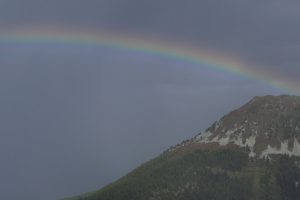 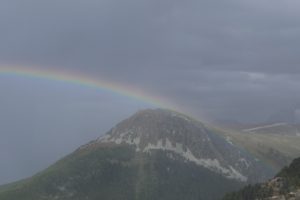 In many ways it’s been a very tough year, not to do with living up here, nor much, luckily for me/us, to do with cv-19. Sadly a lot of that has come on or worsened since June when I did come up here so this post is counting my blessings and thanking colleagues and friends.