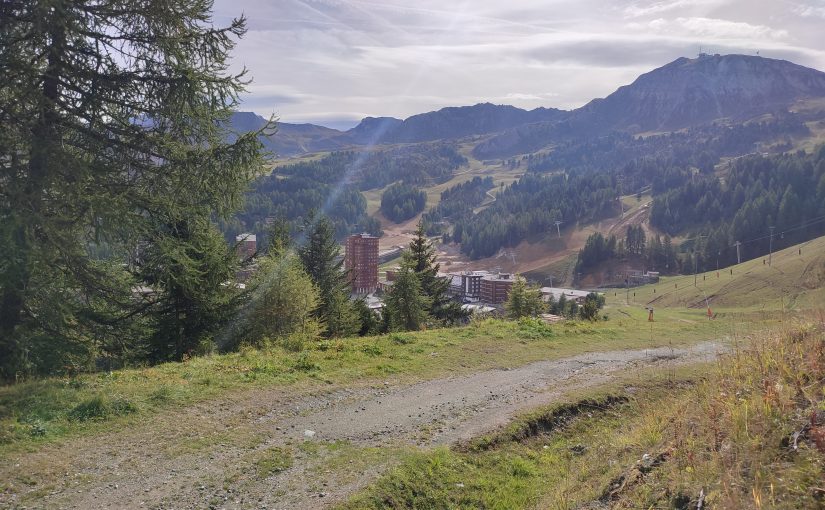 Back on Monday I was walking down to Plagne Centre to get some food for the week. The view above is about halfway there where the track, or the piste as it is in the ski season, turns a corner and you can see Plagne Centre below. A slope rises very sharply on the right hand side of the track, out of that image and as I’d come to the corner I had noticed for the first time that that steep slope had a number of small young conifers. I noticed them because they had a range of paler greens and almost yellow needles that were catching the sun ahead. I sort of half thought of stopping to try to take ‘photos of them but decided to leg it on.

That’s a bit of a story of my life up here. I think of that corner as “bird corner” as there are some mature conifers to the left of the track and above the slope on the right there’s a thicket of shrubs and smaller conifers and there’s often quite a bit of bird noise here and I know I’ve seen a number of species without identifying them properly. I suspect there are goldcrests or firecrests which are pretty special, there are also some warblers in summer I think and at least one thrush species which I don’t otherwise see up here. However, legging it up and down to the SPAR I don’t take binoculars or the camera and I guess I always feel I should be getting back to work. However, I have registered the little area as one a target for my “new life” when I get to that! What the “new life” thing means is that I will make enough time in the week to go out with binoculars and perhaps the camera but with time, enough of it to just sit still for as long as necessary to feel that I’ve started to understand what species, mainly birds but the odd marmot perhaps and perhaps also to get to identify the trees not just call them “conifers” and to recognise more of the flora and butterflies. So this is a “good corner”! (Click to get it full size.) 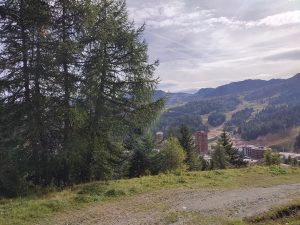 There were a couple of years (I think it was a couple, I’m not actually sure, when I used to spend hours with two mates on Saturdays and Sundays walking around the countryside near Leamington Spa where we lived. We each had our binoculars and Pete and Kim were generally more savvy about nature that me, I remember Pete was very good at identifying birds by ear and Kim was good at butterflies and moths but we were all three mainly there for the bird life. We were also all three good at going ages in total silence and at sitting and standing pretty still for good enough periods for things to stop avoiding us. I know that creating that sort of still, observant, time in my weeks would be good so the “new life”, as so often, has a bit of a return to an “older life”.

Anyway, I came up by the lower track partly to avoid the worst of the smell from the liberal donation of cow pats back up the upper track nearer Aime 2000. As I walked back up I mentally kicked myself for not having at least stopped and tried to take usable ‘photos of the little trees clinging to the very loose soil on the steep slope. I wanted to share them so I doubled back (finding a little path I didn’t know was there connecting the two tracks) and here you are. 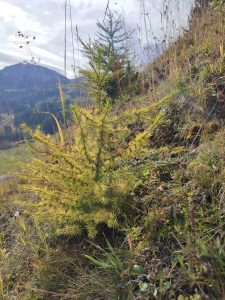 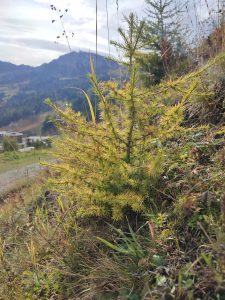 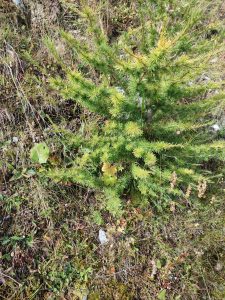 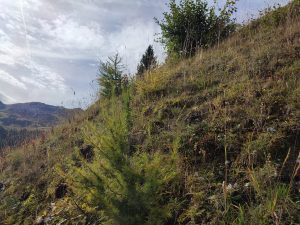 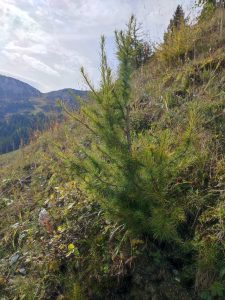 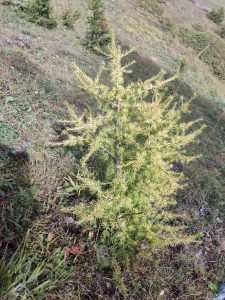 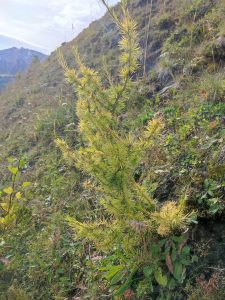 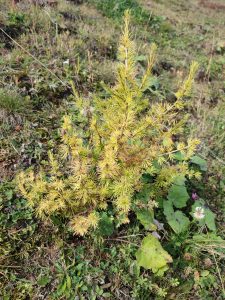 They’re not great ‘photos but I think they do convey both the light colours of needles that had caught the low sun and my attention on the way down and I think they also give a sense of that slope. I was having to pick my footing very carefully on the slope: the soil seems only a very thin and friable inch at most and liable to slip away under you feet have you sliding ignominiously back down to the track. I felt amused and impressed by the tenacity of the little proto trees and wonder how many will survive.

Which brings me to the more grim punchline here. Yesterday I finally put the keyboard aside for 40 minutes and watched Climate change: Europe’s melting glaciers | DW Documentary. It has beautiful sequences of the Alps and, though none of Savoie (it’s by a German documentary company and is mostly in Switzerland, Germany, Italy and Slovenia) they feel so familiar. However, the message is grim: that none of the glaciers are likely to be up here by the end of the century unless our politicians really do address CO2 and methane and climate change, unless we all force them to do that and change our ways of life. Perhaps it’s aridity, despite scary flash storms, and “forest” fires that will threaten these young trees more than the challenges of clinging onto, into, that slope. Do watch the video. The voice over is, to my ear, American but the young people who form the narrative theme are from many countries and it’s right they should be as, as Save the Children have just pointed out, it’s children and particularly children from poorer countries (not the ones creating the problem) who will suffer most from climate change. I was lucky to have my countryside in my young teens. What will future generations have?

An odd spin off, linking with a bit of my work at the moment: on the documentary you get to see the subtitles in what I think is Bahasa Indonesia. Climate change is a global issue.