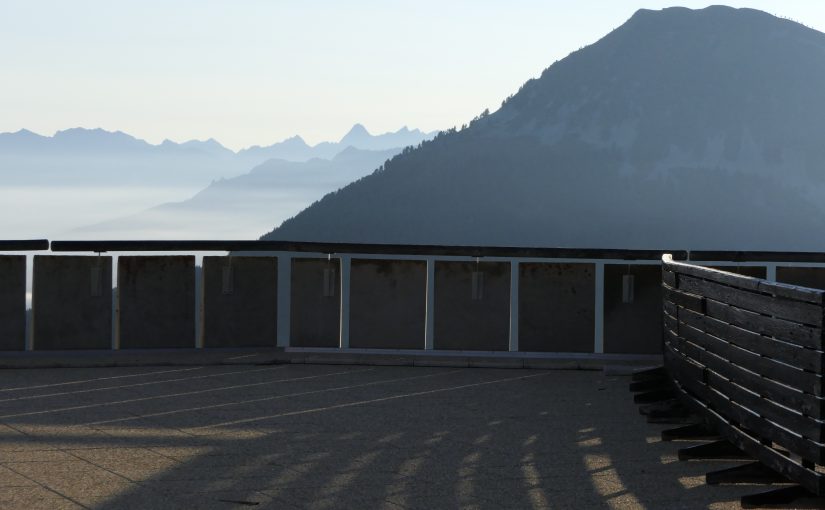 Yesterday I went, virtually, to Malta to the 8th conference of Qualitative Research in Mental Health, QRMH8 to its loyal friends. I was there because Professor Avdi, from Aristotle University in Thessaloniki gave a presentation of the work she and I did for the paper in the title of this post: Avdi, E., & Evans, C. (2020). Exploring Conversational and Physiological Aspects of Psychotherapy Talk. Frontiers in Psychology, 11, 591124. https://doi.org/10.3389/fpsyg.2020.591124. (Open access at https://www.frontiersin.org/articles/10.3389/fpsyg.2020.591124/full.)

I’m very proud of that paper as it was a genuine attempt to try to do more than a “mixed methods” piece of work, i.e. a mix of qualitative and quantitative methods. The paper came out of work Evrinomy had done within the Relational Mind research project which was a Finnish led collaborative project using both qualitative and quantitative methods to explore that title: minds in relationship and perhaps constitute by relationships. I’ve been following their qualitative work, and, intermittently, the QRMH conferences, for some years now and Evrinomy and I have know each other for many years, starting with the Greek translation of the CORE-OM co-led by myself and Dr. Damaskinidou: a good friend to both of us who introduced us through that work.

Evrinomy approached me some years back, 2015 or 2016 perhaps as I think I was still in clinical work. At that point she was asking my views on the work she was doing with colleagues in Thessaloniki trying to link the physiological arousal indicators with the processes in couple and individual therapies in which therapists and clients wore heart and respiratory rate recorders. That led to me not being terribly useful to a very tolerant PhD student supervised by Evrinomy, Anna Mylona on work she was doing linking “rupture” classification of the transcripts from 2018 to 2020 and that led, in turn to this paper that Evrinomy and I got done last year.

While Evrinomy, with I think some genuinely useful input from me worked up a fascinating conversation analytic (CA) unpicking of the session, we, well probably I is more accurate, worked through a series of quantitative tools to look at the changes in ASV, the arousal measure, through the session we were dissecting. I taught myself a lot about time series analyses and got to understand PDC: partially directed coherence analysis which had been a method her Thessaloniki colleagues (from neurophysiology) had advocated. In the end we agreed only to use very simple plots of the data against the eight “Topical Episodes” (TEs) that emerged from the CA. That led to plots like these. (Click on them to get the full plot.) 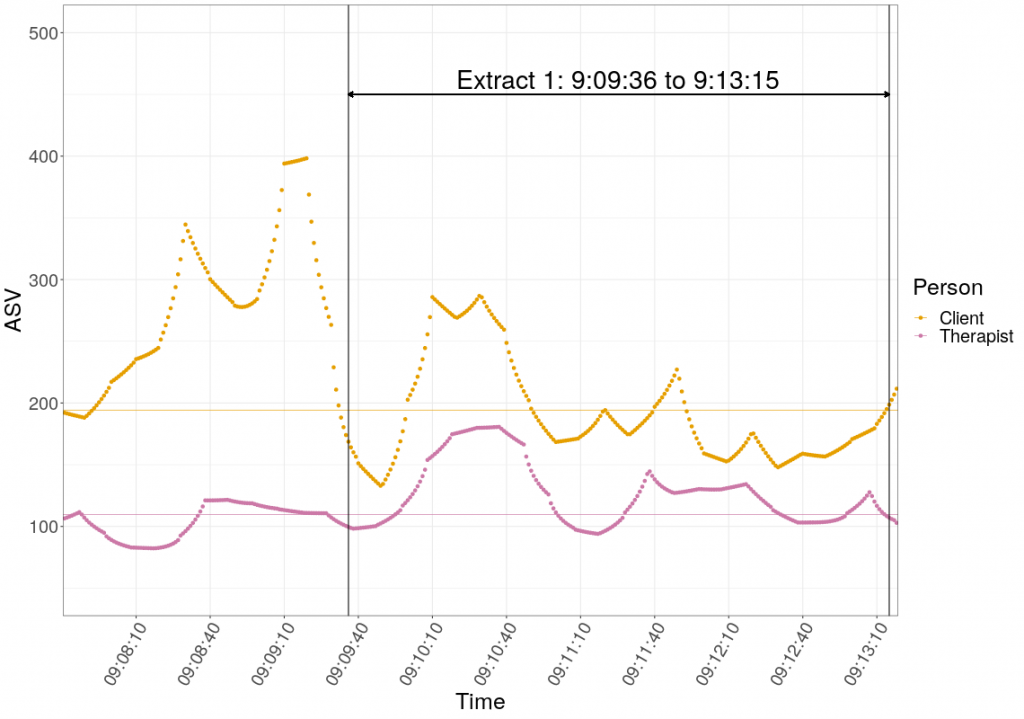 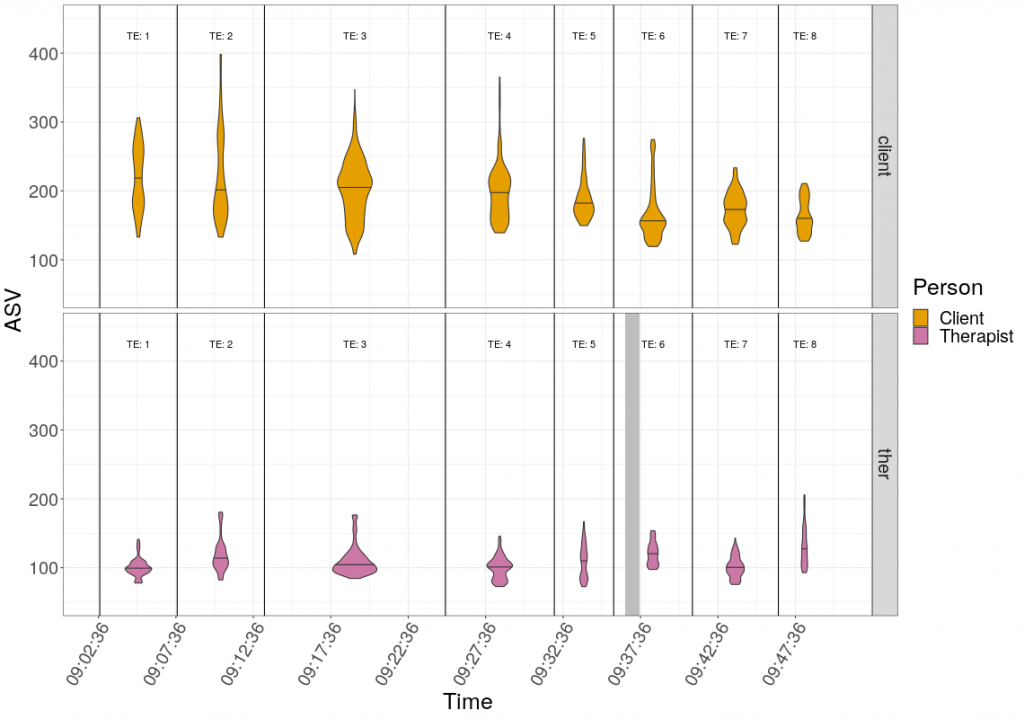 If you’re interested to read more, particularly the excerpts and CA, do look at the paper. As an example of truly blended, rather than simply mixed, research it’s not sophisticated but what I think did emerge was what happens when a largely qualitative researcher (Evrinomy is seriously experienced and skilled) and a quant geek like myself, but who both share a clinical background try to complement each other. It’s not particularly clear in the paper (it’s big and quite dense as it is!) but we each learned a lot about blending.

Three simple methodological things emerged for me:
1. one huge strength of statistical quantitative research is the ability to formulate “objective” tests to tell us whether we appear to have non-random things in our data;
2. however, very often the purity of those models is not really a good model of how the actual data arose and sometimes “descriptive, exploratory and ‘estimating'” statistical methods may be more robustly useful;
3. if your methods are so sophisticated, complex and unfamiliar that practitioners will be essentially reduced to the role of audience at a display of magic we have an odd relational mind relationship being created between researchers/authors, readers (practitioners) and the data.

#2 was clearly the case for our data and a lot of the sophisticated things I had hoped might be useful were clearly stretching the relationship between data and model and others, to me the PDC method, fell into that “this is magical” #3 so we ended up with very simple plot methods but tried to keep a genuine blending of quantitative and qualitative data.

Perhaps more interestingly and importantly, this pushed us into a lot of thinking about the fact that methodological issues like those, or any of the many qualitative methodological choices, actually sit on top of epistemological choices. (Quick acknowledgement to Dr. Edith Steffen now in Plymouth who, when we overlapped in the Univesity of Roehampton, challenged me to take epistemology seriously despite the brain ache that causes me!)

There is an odd polarisation that goes with the general qual/quant polarisation in research about minds: qualitative papers almost always have some statement of epistemological position and, largely implicitly, locate that in the mind of the author(s) exposing it for consideration by the readers; by contrast, epistemological position statements are hardly ever seen in quantitative papers. This has the effect of leaving the reader of quant papers to assume the paper isn’t arising from an authorial mind or minds, but in some abstract “reality”: in fact the papers claim truth value in what seems to me to be a completely untenable “empirical positivist” position. I’m left wondering if we could blend our methods so much more usefully if started to insist that all papers have at least a one line statement of epistemological position. I’m trying to make sure I put mine into all my papers now and to insist that authors should put that into their work when I’m peer reviewing. I think it’s going to be a long time before this might become a norm and don’t think we’ll tap the real power of genuinely blended method instead of often very tokenistic mixed methods.

Onwards! Oh, here’s a souvenir from my only non-virtual visit to Malta, in 2018.

I do like the blending of languages and a clear plot of the message! Malta is a fascinating place. Perhaps I’ll get round to doing the intended second blog post in my personal blog that was supposed to complement the first, rather negative one. If you’re wondering about the choice of header image: it’s a recent image from the terrace outside my current workplace and I thought the juxtaposition of the moutains through atmospheric haze and the 1970 brutalist balcony and wooden fences had something of the flavour of blending qual and quant! For more on living there you might try “Squatting (with my coffee)“!